Public Forum: Presentation of the Verdict 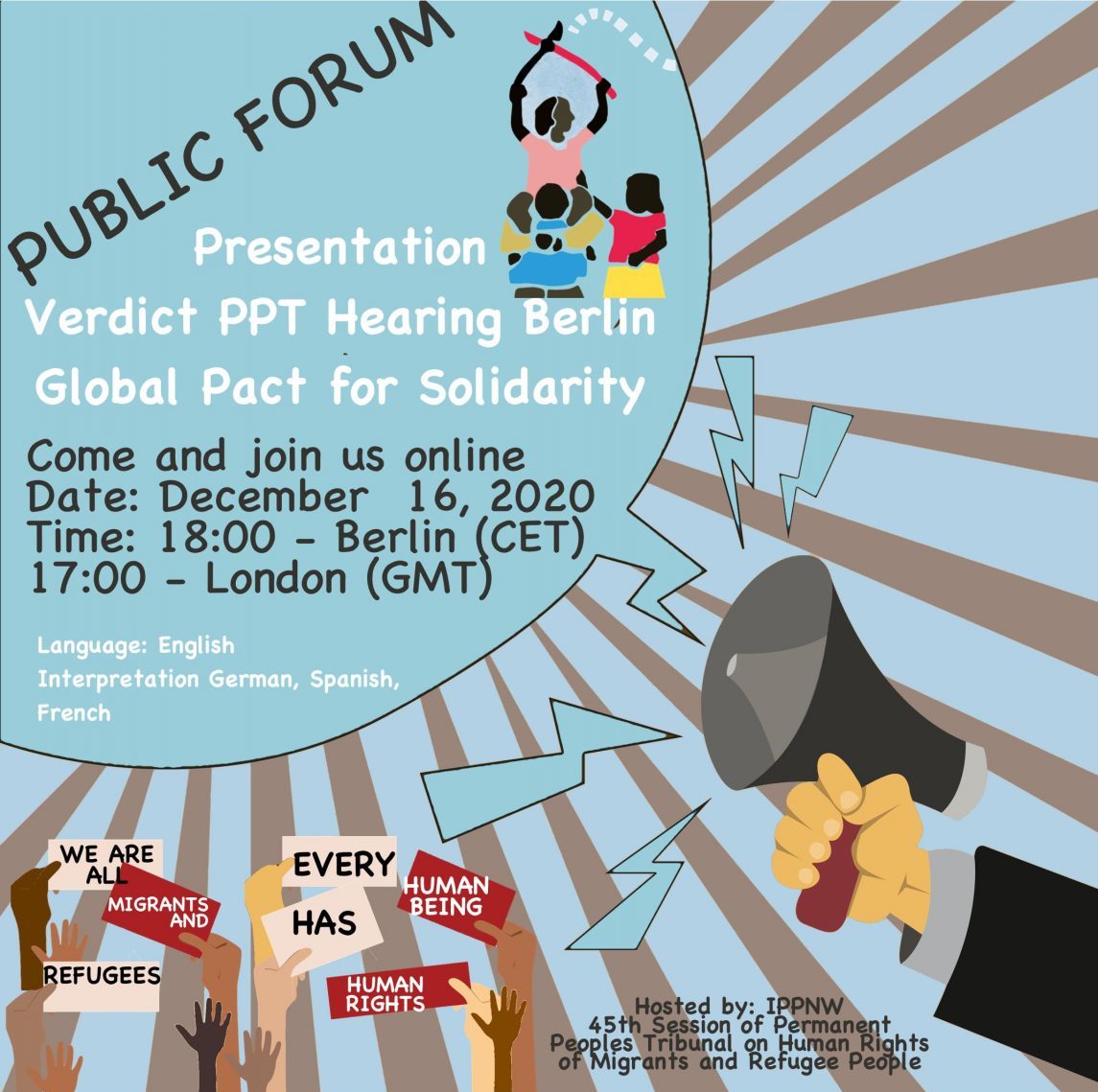 We invite you to join and participate in this Public Forum  in which the Permanent People’s Tribunal (PPT) Jurors will present the Verdict on the PPT Hearing  held in Berlin on October 23-25, 2020.

Between July 2017 and October  2020, in response to the demand of more than 500 migrant and refugee organizations, the Permanent Peoples Tribunal convened its 45th Session on the Violations with Impunity of the Human Rights of Migrant and Refugee Peoples. It  held six Hearings: Barcelona (July 2017), Palermo (December 2017), Paris (January 2018), Barcelona (July 2018), London (November 2018), Brussels  (April 2019)  and Berlin (October 2020). Each of the Hearings heard the testimonies of migrant refugee organisations and communities, who have presented their experiences of systematic violations of their fundamental human rights arising from migration and asylum , development and border policies being implemented by the European Union and its member states. The PPT Hearings also heard the reports of several expert witnesses on the issues.

Based on its findings and judgments during the hearings, the PPT has concluded that taken together, the immigration and asylum policies and practices of the EU and its member states constitute a total denial of the fundamental rights of people and migrants, and are veritable crimes against humanity: even though they may not be personally ascribable to individual perpetrators according to commonly agreed criminal law definitions, they must be recognised as “system crimes”.

During this Public Forum, the participants will take up the challenges identified across the hearings of the 45th session. We come together to discuss with other organisations from Europe and other regions of the world on building together a common pact of solidarity. Solidarity actions that will give an identity and visibility to the migrant and refugee peoples and to those acting in solidarity. This is a critical moment to further strengthen our resistences to a racist and militarised fortress Europe and build a new solidarity at local, national and international level  as we strategise our action for system change. As we commit to work for human rights for all, we recognise the essential link between the fundamental rights of migrants and refugees and the future of our democracy.

It is not a crime to migrate or seeek refuge! It is a human right!
Let us Build a Global Pact of Solidarity!

This entry was posted in General, Gesundheit, Menschenrechte. Bookmark the permalink.