We, the affected communities of migrant and refugee peoples, together with the movements, networks and organisations involved in the process of the Permanent Peoples Tribunal (PPT) on the violations with Impunity of the Human Rights of migrant and refugees, propose a Global Pact of Solidarity for the Rights of Migrant and Refugee peoples. We reach out globally, to all those who believe that to migrate or seek asylum is not a Crime – It is a Human Right.  Let us build together, this Global Pact of Solidarity. 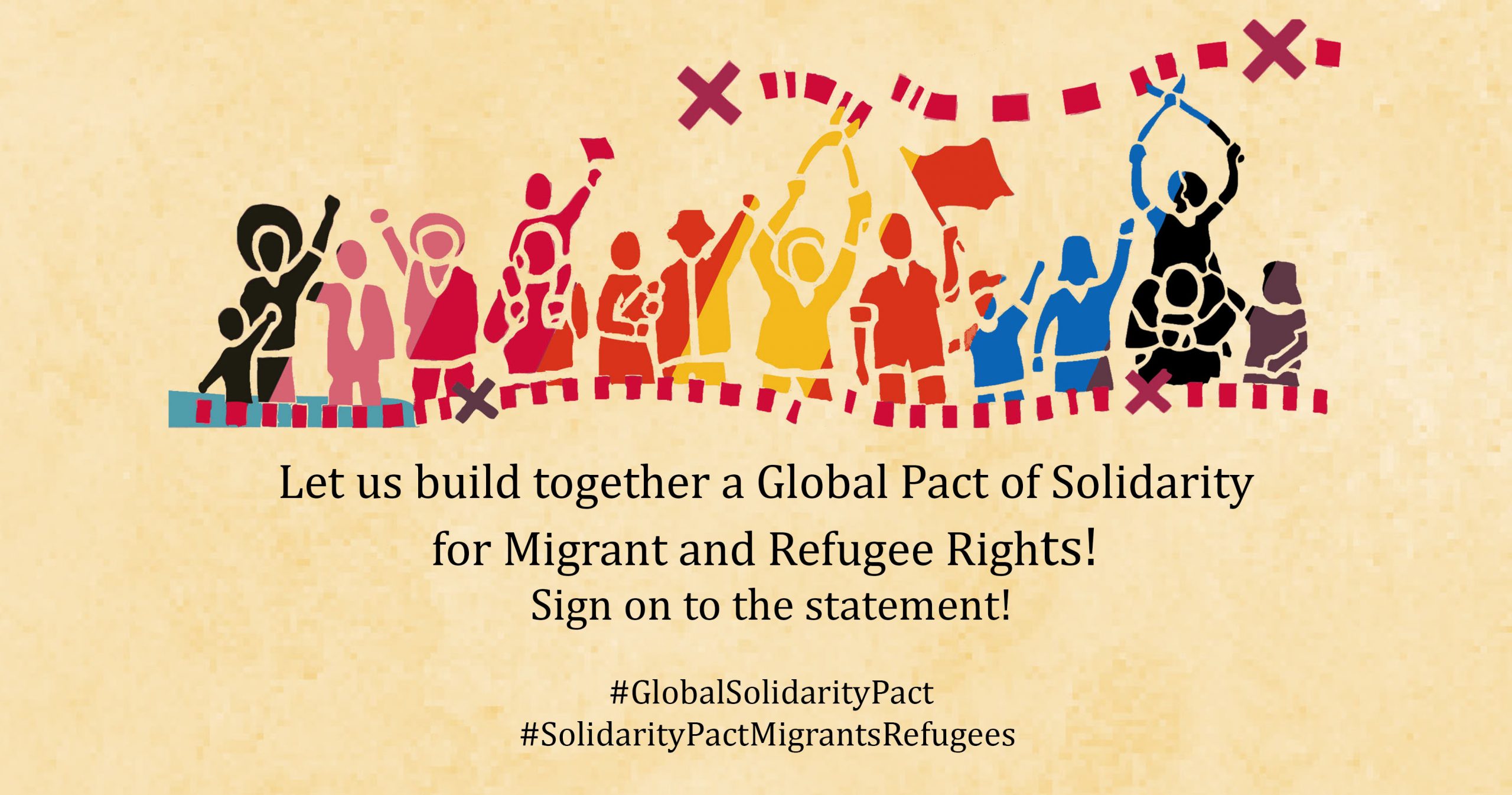 END_OF_DOCUMENT_TOKEN_TO_BE_REPLACED

PPT calls for a Global Pact of Solidarity

The EU Pact on Migration and Asylum, recently presented by the European Commission (EC) in Brussels (September 23), turns human migratory movements into crimes and migrants and refugees into potential criminals who must be identified, and tracked in case of absconding, detained and returned to origin countries, regardless of the circumstances by which they reached EU borders.

Fortress Europe of Borders and Sites without Rights

The Pact was compared by the EC Vice-President Schinas to a “house with three floors”, including:

1) The external dimension, focused around strengthened and specific partnerships with countries of origin and transit, designed to keep people in those countries and force the country under ”carrot-and-stick” schemes, to readmit those able to reach Europe;

2) The management and militarisation of the EU external borders, with a reinforced FRONTEX and quicker “selection” procedures and return mechanisms to prevent people to set foot in Europe and

3) A so-called “solidarity” mechanism, which totally distorts the concept, and involves a division of responsibilities between states regarding the implementation of measures for the identification and control of migrants and refugees. These measures include restriction of human rights, repression at borders and prevention of rescue at sea from a humanitarian point of view – but without in any way recognizing the fundamental rights of migrant and refugee peoples and their communities. For them there are no rights and not even solidarity. END_OF_DOCUMENT_TOKEN_TO_BE_REPLACED

Podcast Episode 4: Why the EU border regime makes people ill & how migration and solidarity are criminalised Episode 4 (german): Why the EU border regime makes people ill & how migration and solidarity are criminalised

In this episode we talk to Andrea and Frauke from borderline-europe – Menschenrechte ohne Grenzen e.V. (Human Rights without Borders). borderline-europe conducts public relations and educational work on European migration policy with the aim of creating an active, political and critical awareness in society. The podcast was recorded on the day Camp Moria on Lesbos burned down. We talked about our frustration with the continuing inhumane conditions migrant and refugee peoples are facing, why the EU border regime is making them ill, how migration and solidarity are criminalised and what needs to change.

We welcome the holding of this Tribunal in Berlin and the theme chosen, namely “The Right to Health and Access to Health Care for Migrants and Refugees”.

After the unprecedented health crisis that we are going through, the issue of health is more crucial than ever. While it has affected all categories of the population without distinction, rich or poor, it has particularly affected those who were already in a vulnerable situation and extreme poverty. We are thinking in particular of migrant workers, undocumented migrants, refugees, vulnerable people and the negative consequences of this crisis on their lives, especially in terms of access to housing, health care or the labour market.

Unfortunately, we have witnessed situations where those who already have nothing find themselves more exposed to the virus, due to overcrowded households, or lack of social distance in transport to their workplace.
END_OF_DOCUMENT_TOKEN_TO_BE_REPLACED

The current migration and asylum policies of the Federal Republic of Germany and the EU seriously violate the right to health and the physical and psychological integrity of migrant and refugee peoples. This is the result of the Human Rights Tribunal organized by an alliance of civil society organizations in Berlin at the weekend.

“The reports of fugitives and their supporters paint a frightening picture of German and European migration policy” summarized juror Sarah Lincoln. “Many of the refugees are sick and need special protection. Instead, they are treated like second-class citizens, without privacy, without access to adequate health care, without procedural rights”.

On the basis of six charges, the tribunal examined the human rights situation of asylum seekers, undocumented immigrants, and workers from EU and non-EU countries. In addition to discrimination by health professionals and language barriers, there were also legal provisions that hinder access. Witnesses from the refugee camps on Lesbos gave a nuanced description of the catastrophic situation on the ground. According to the medical doctor Jessica Horst, the unhealthy living conditions, limited access to medical care and non-standardized medical care pose a serious threat to the health of its inhabitants.
END_OF_DOCUMENT_TOKEN_TO_BE_REPLACED

Taken away from his hospitalised wife, Jamal* reports about the condition in a Swedish deportation prison during COVID-19 and gives his testimony of the inhumane German and European Migration policy

END_OF_DOCUMENT_TOKEN_TO_BE_REPLACED

Learn more about the Permanent Peoples‘ Tribunal and the right to health in the episodes of our podcast „Health is a Human Right“. 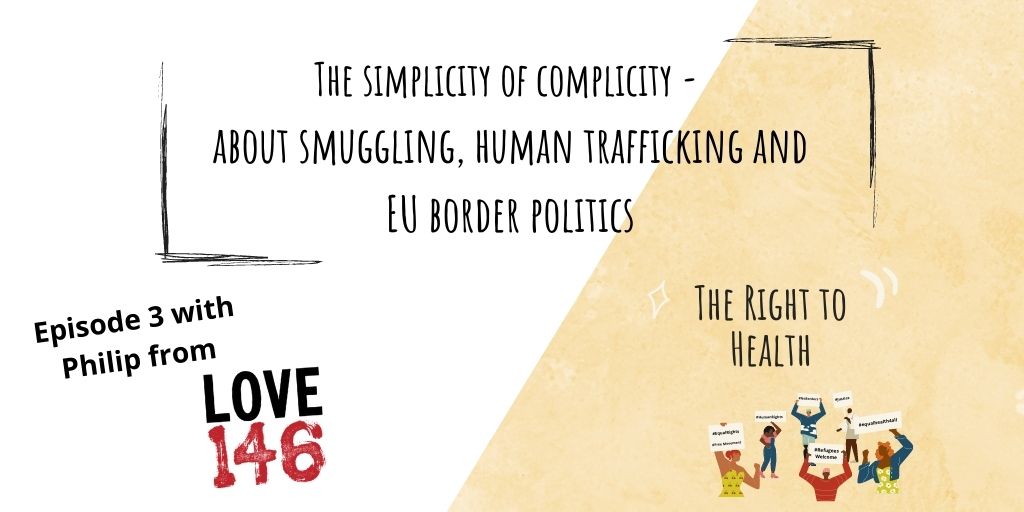 Episode 3: The Simplicity of Complicity – About Smuggling, Human Trafficking and EU Border Politics

In this episode we talk to Philip from Love146, an international human rights organisation working to end child trafficking through prevention, education and survivor care. We discuss the intersection of smuggling, human trafficking and the migration policies in Europe, its impact on children and young adults on the move and how complicity in crimes is achieved by acting unjust but also by not acting at all when being confronted with injustices.

Podcast Episode 2 (german): For the right to health care for all migrants!

Learn more about the Permanent Peoples‘ Tribunal and the right to health in the episodes of our podcast „Health is a Human Right“. 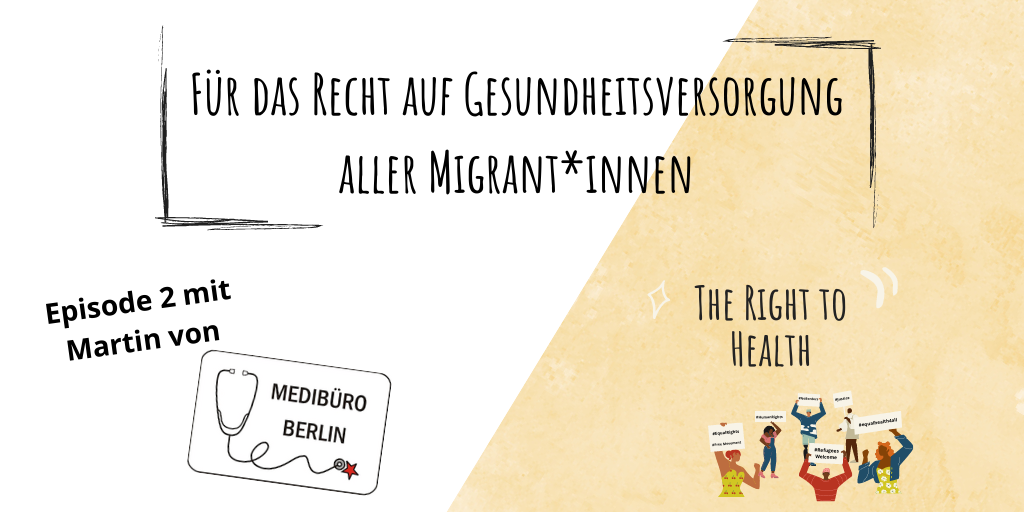 Episode 2 (german): For the right to health care for all migrants!

In this episode we talk to Martin from MediBüro Berlin. MediBüro is a nationwide active organisation that campaigns for the right to health care for all migrants. We talk about the discriminatory legal situation in Germany, which makes access to health services more difficult for migrants and about the fact that Medibüro should not even exist.

Your message to the Permanent Peoples’ Tribunal

Distanced but United – Show your support, raise your voice for #equalhealth4all

The pandemic complicates our possibility to physically unite, but we can still raise our voices in solidarity and demand equal rights and health for all. Let us know what you would like to tell the Migrant Permanent Peoples‘ Tribunal (PPT), the people and politicians in Germany and Europe. 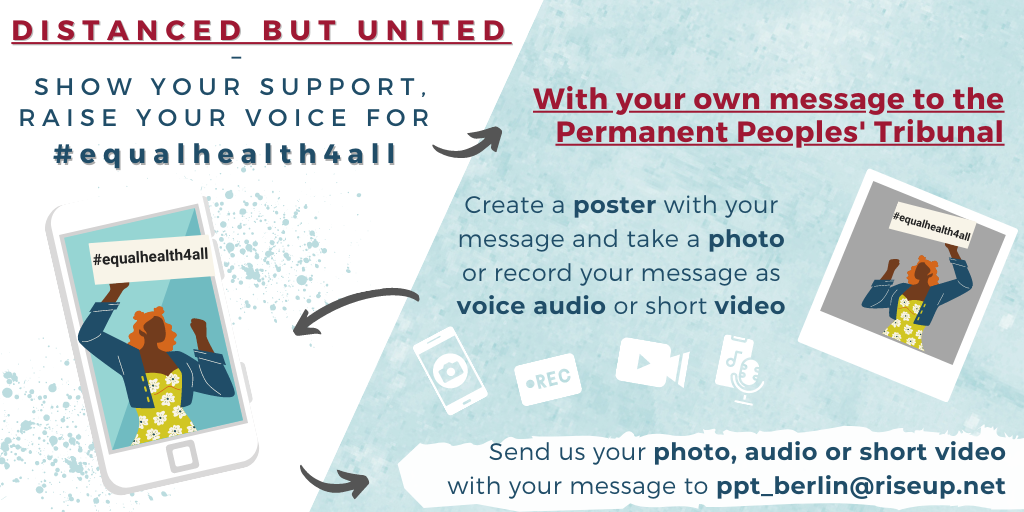 Send us photos of signs and banners, send us short videos or audio of your message.

Your messages and ideas will be featured on our social media channels for the Campaign of the Berlin Hearing of the PPT. You can be highly visible or remain anonymous. You can submit a message individually or as an organisation or collective.

Show your solidarity and send us your message to ppt_berlin@riseup.net

Podcast Episode 1: Why health is a human right … 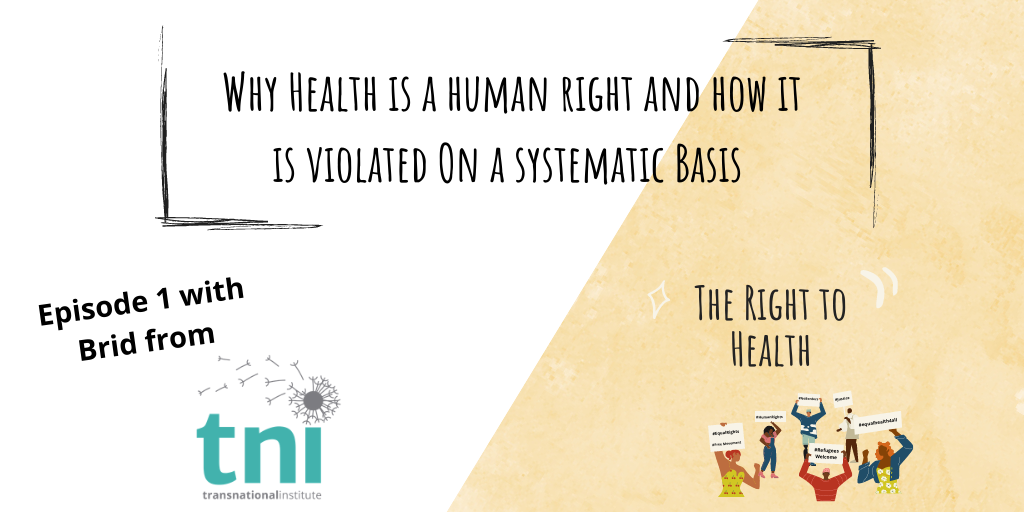 Episode 1: Why health is a human right and how it is violated on a systematic basis

In this episode we speak to Brid Brennan from the Transnational Insitute (TNI) about the origins of the Permanent Peoples Tribunal, why health is a human right and how the imbalance in the global structure of labour impacts the health and lifes of migrant and refugee peoples. We further touch on the role of the European Union and transnational corporations in implementing systematic practices that violate human rights and discriminate refugees and migrants on an existential level.

Listen to our Podcast on Spotify: https://open.spotify.com/show/0xxu5dEIIjr0IUc9qCLIPb…