Leave no one behind! The EU is avoiding its responsibilities

A report by Charlotte Linke and Jessica Horst, two doctors who are currently working for an NGO in Moria (Lesbos).
Published in the Forum Magazine of the IPPNW e.V., June edition 2020 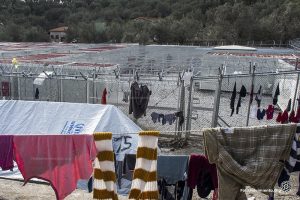 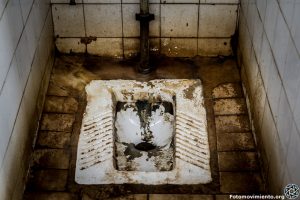 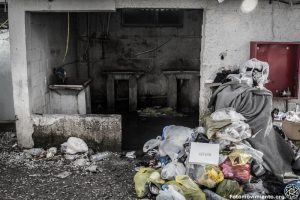 Lack of sanitary facilities, densely packed tents, failing water and electricity supplies and sexualised violence are just some of the things that are part of everyday life in Moria. The Doctors Charlotte Linke and Jessica Horst report and tell how the Covid-19 pandemic is affecting the situation. The Conclusion: If human rights really apply to everyone in the EU, Moria would have been evacuated by now.

At the moment more than 20.000 people live in Moria on
Lesbos, a camp with an original reception capacity
of 3,100 people. In the context of the European Border policy refugees are being detained on the Greek islands. The EU-Turkey Deal of 2016 allows to deport all “irregular” arriving refugees, who do not apply for asylum or whose application has been rejected, to Turkey. The Deal also prohibits refugees from leaving the islands until a decision has been made on their application for asylum which could take years.

According to refugees themselves the living conditions in Moria are highly inhuman and degrading. Despite years of critical voices from NGOs and the Greek population the situation has increasingly deteriorated. Densely packed tents are often the only accomodation available, there is a lack of sanitory facilities, failing water and electricity supplies and for food and drinking water refugees are obliged
be queued for hours every day. Further violent conflicts and sexualised
violence are part ofthe life in Moria. All this leads not only to skin, diarrhoea and respiratory diseases, but most people suffer in particular
psychologically under the situation. Many of them have already lost their jobs in their country of origin, have suffered war, torture or other violence while fleeing,
and are further traumatized by the ongoing existential uncertainty they experience as refugees, the police presence in Moria and the violence.

The Covid 19 pandemic and its related measures
have exacerbated their experience and suffering. On the one hand,
(also due to the fascist attacks in March) many support structures have
collapsed, on the other hand people are only allowed to leave the camp in exceptional circumstances. This heavily increases the tension in the camp.
Laready before the beginning of the pandemic the health care of the people in Moria was precarious. Health care in Moria is and will be to a large extent provided by
NGOs, with limited possibilities for referral to institutions of the Greek health system.
Since the lockdown – the closing of the camp due to of the coronavirus – the already poor access to blood tests, diagnostics and specialist medical
consultations has worsen. Often these esrvices are no longer possible or are only possible in emergencies. The present conditions and personnel capacities of the medical
system in Moria do not correspond to the supply needs, which results into
hours of waiting, and sometimes after all the patients do not even have the option to see a doctor.
It is frightening how much suffering and illness is caused by the living conditions
and the continuing uncertainty in Moria.
So far, there have been few cases of Covid-19 on Lesbos.
While the curfews for Greeks are slowly loosened, refugees may be forced to stay in the camp. Measures for detection and preparation to an Corona outbreak, such as the introduction of central triage (in which symptoms of Covid-19 are being screened systematically) and the establishment of isolation facilities, were admitted after
some delay, but appeared in the face of the geographically and hygienic restrcted  camp’ conditions as completely insufficient.
If the first Corona case will be detected in the camp, it will be no longer possible to prevent an outbreak.

If human rights really apply to everyone in the EU,
Moria would have been evacuated by now. Instead the EU is committed to place its  border management above human life. Now at the latest, with the threat of the Covid 19 pandemic, the evacuation and closing of the camp is the only reasonable measure to protect the
People.