In the first months of the Corona pandemic the hashtag #LeaveNoOneBehind has frequently appeared on banners on balconies, on house walls and street chalk on the street. Borderline-europe made an exhibition about this hashtag that demands the evacuation of hotspot camps for refugees on the Greek islands and explained how individuals can become politically active.

The NGO Borderline-europe designed an exhibition with which they want to illustrate, for what the hashtag #LeaveNoOneBehind stand for and what possibilities exist for private individuals to become politically active against the European policy of isolation. With the help of photos from Moria and short texts, borderline-euorpe explains
– how the European Union’s hotspot regulation and the so-called EU-Turkey deal led to the creation of the camps,
– what political incentives are behind the spatial, social and sometimes legal sealing off of refugee camps,
– what citizens can do to increase the pressure on political decision-makers to evacuate the camps 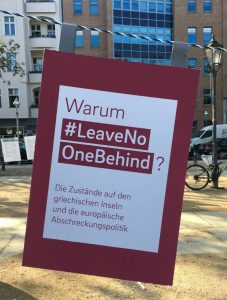 The exhibition has so far been shown twice in Berlin and has stimulated many conversations with pedestrians. On request, the materials can be borrowed from borderline-europe in order to carry out an action yourself.